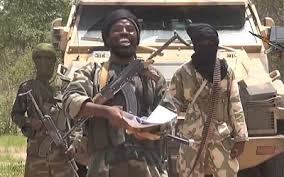 Boko Haram’s elusive leader Abubakar Shekau has been fatally woundedin the shoulder.This was disclosed in a statement issued today by the Nigerian military.

The army’s spokesman Sani Usmanwho did not give further details about Shekau’s condition, also revealed that three seniorBoko Haram commanders were also killed, while several others were woundedin an air strike on the Islamist group’s forest stronghold last Friday.

The claim comes as US Secretary of State John Kerry visits the country for talks likely to focus on the fight against Boko Haram, which launched an uprising in 2009.The Nigerian Army has repeatedly claimed to have killed Shekau in previous raids only for him to appear shortly afterwards in videos.