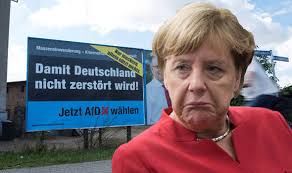 In a stinging defeat for Merkel one year ahead of parliamentary elections, the upstart AfD won twenty-one percent of the vote in their first election in Mecklenburg-Vorpommern state by campaigning hard against the chancellor’s policies on refugees, according to an exit poll by the ARD TV network.

The SPD, which has ruled the rural state on the Baltic coast with the CDU as junior coalition partners since 2006, won thirty-point-five percent of the vote, down from thirty-five-point-six percent in the last election in 2011. The CDU won nineteen percent, down from twenty-three percent in 2011, and its worst result ever in the state.

Under Merkel’s leadership, Germany has been taking in large numbers of refugees and migrants and anti-immigrant feeling has increased. The AfD, initially an anti-euro party, has become the party of choice for voters dismayed by Merkel’s policy.