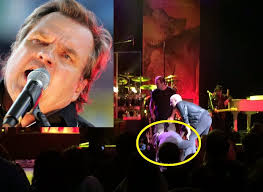 Earlier in the week he had cancelled shows in Moose Jaw and Calgary, saying he was ill.

The sixty-eight-year-old is one of the most successful recording artists of all time with hits including Bat Out of Hell.

He was performing another hit, I’d Do Anything for Love (But I Won’t Do That), when he dropped his microphone and fell to the floor, video footage showed.

Meat Loaf previously collapsed in 2003 at a performance in London, and again in 2011, during a July concert in Pittsburgh, an incident which he later blamed on an asthma attack. The singer’s album Bat Out of Hell has sold more than forty-three million copies worldwide.