Many injured as students, police clash in Ondo 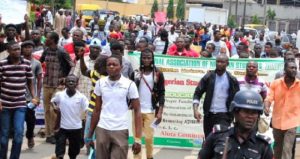 Social activities were paralyzed in Owo town, Ondo State on Sunday following a bloody clash between the students of Rufus Giwa Polytechnic, Owo and men of the state police command. According to an eyewitness, many people were injured while several vehicles were destroyed during the clash. A student of the institution whose identity could not be confirmed as of press time was also allegedly shot by the police.

It was gathered that trouble started when a police patrol van hit some students of the institution and the policemen in the vehicle allegedly abandoned the student and ran away. The development was said to have led the students to protest to the ‘B’ Division Police Station at Otapete area of the town. It was also alleged that the policemen at the station, instead of attending to the protesting students, fired tear gas to disperse them.