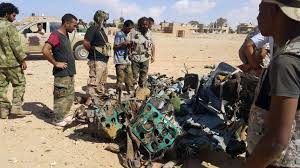 Three French soldiers have died in Libya after their helicopter was shot down, President Francois Hollande says. The soldiers were killed while carrying out “dangerous intelligence operations”, Mr Hollande said. Libya’s UN-backed government responded by saying that their presence was a “violation” of the nation’s sovereignty. It said in a statement that it was “displeased with the French government’s announcement”.

On Tuesday, Associated Press quoted Libyan officials as saying an Islamist militia shot down a French helicopter. The attack on Sunday happened near the city of Benghazi, and left no survivors.