Leicester City striker Jamie Vardy will miss the Premier League leaders’ visit to Manchester United on Sunday after being banned for an additional game for improper conduct. 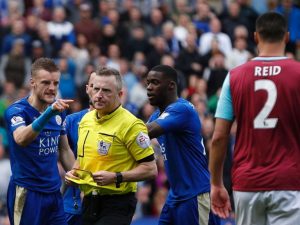 Vardy, who is the league’s second-highest scorer this season with twenty-two goals, angrily confronted referee Jon Moss after being picking up a second yellow card for diving during Leicester’s two-two draw against West Ham on the seventeenth of April, 2016.

After missing Sunday’s four-nil win over Swansea, Vardy will now also be suspended for Sunday’s match at Old Trafford, where Leicester could wrap up their first ever Premier League title with victory.

The twenty-nine-year-old, who was also fined ten thousand pounds, will be available for the final two matches of the season against Everton and Chelsea.