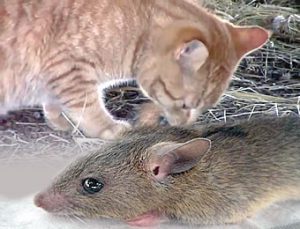 IT is not possible to have demonstrable relationship between cat and rat and have the two cohabit without the latter being a causality. From all indications, residents of Plateau have started employing the reality of this to fight Lassa fever. To ward off rats believed to be carriers of this pandemic, quite a number of people now keep cats instead of other conventional means of killing rats

Following the discovery of Lassa fever in the state which led to the death of a woman last week and leaving few others hospitalised, residence of the state, especially Jos, the state capital, have become apprehensive of the deadly disease and are taking various precautionary measures to ward off rats considered to be carriers of the disease.

A cross section of residents of Jos, who spoke with Arewa, revealed that it was better for them to keep cats than to apply rat poison and trap which might not be effective like cats whose presence is enough of scare away every unwanted rodents including rats.

Going round the state capital, Arewa findings revealed that heap of refuse and horrible gutters which serve as hide out for rats still dotted some parts of the city despite campaign by the State Ministry of Health that people should maintain hygienic environment to prevent the spread of Lassa fever.

The state Commissioner of Health,  Dr Kuden Kamshak,  who recently  confirmed that Lassa fever had claimed one life in the state, said the state government had placed a team of medical experts on  alert to prevent its spread.

According to him, the deadly disease is  noticed in five local governments of the state namely; Jos North, Mangu, Langtang South, Pankshin and Shendam LGA respectively, adding that the state  with the support of the World Health Organisation (WHO) was working round the clock to contain the spread of the virus.

“The state government has established Disease Survellance and Notification Officers (DSNO) in each of the 17 local governments in the state to monitor and manage the health challenge.

“As you are all aware, the Federal Ministry of Health has confirmed that the country has been experiencing Lassa fever outbreak in the past few weeks in some states including Bauchi, Nassarawa, Niger, Taraba, Kano, Rivers, Edo and Oyo States respectively.

He said Lassa fever is a Zoonotic disease, which means that human beings became infected by contact with infected animals, adding that animal host of the virus is rodent (rat) and the animal  sheds the virus through its urine and faeces.

“Human beings can become infected with the virus when they are exposed to urine and faeces of the carrier animal. Person to person transmission occurs both in communities where people live in clusters and spread faster in such crowded environment especially under poor sanitary conditions.

The commissioner, who said health officer could be at risk if they do not employ proper barrier nursing and infection control practices as expected of them added that  fever is always difficult to distinguish from other viral hemorrhagic fevers like Ebola virus and other diseases that causefever.

He urged indigenes not to panic, but remain calm and vigilant and report promptly to the nearest health care facility just as he also warned residents to clear their homes and surroundings of rats, maintain good sanitary habit and also keep cats at home to keep off rats.