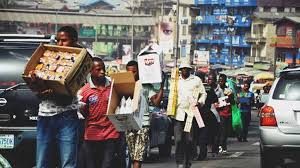 The Lagos Environmental Sanitation Corps, LAGESC, is set to commence Operation Zero Tolerance on Street Trading and hawking across the state in line with the mandate of the present administration of Governor Babajide Sanwo-Olu at promoting a cleaner, hygienic and aesthetically resplendent environment.

The Corps through advocacy, as well as ensuring total enforcement of the environmental Sanitation laws of the state will liaise with appropriate stakeholders before massive enforcement and implementation.

The Corps Marshal, Akinpelu Gbemisola disclosed this on Monday at Alausa, Ikeja during one of its advocacy campaigns to the President-General, Association of Commodity Women and Men of Nigeria, Mrs. Folashade Tinubu-Ojo.

Akinpelu noted with dismay the activities of street traders, displaying of goods on walkways, hawking on highways which impedes free flow of traffic coupled with littering of dirt on the roads. She added that these prohibited acts expose traders to hazards like in the case of brake failure among other catalysts of auto accidents.

Lagos to get fourth Mainland Bridge in three years 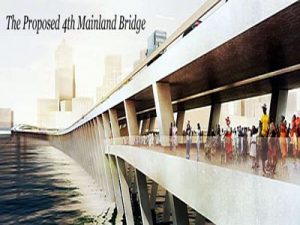 Lagos State Government has signed a Memorandum of Understanding to begin the construction of the thirty-eight kilometer fourth Mainland Bridge, expected to bring a fourteen-year old dream to reality.

The construction is expected to cost eight hundred and forty-four billion naira in a Public Private Partnership initiative and would be delivered in three years. Governor Akinwunmi Ambode said the construction of the bridge had become imperative following the phenomenal growth of the State with a population of over twenty-one million people, which has in turn increased commercial activities and traffic gridlock. 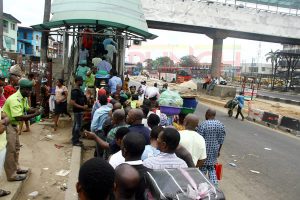 The Lagos State Government has announced that an additional foot bridge would be constructed at Ojota bus stop on Ikorodu road, to complement the existing one in order to contain the recent upsurge in usage by Pedestrians.

The Commissioner for Information and Strategy, Mr. Steve Ayorinde, who disclosed this in a statement on Thursday, said the decision arose out of the need to reduce the long time being currently spent in the queue by people using the bridge.

He said the construction of the additional bridge has become necessary after the newly erected New Jersey Wall on the median of the expressway has effectively curtailed indiscriminate dropping and picking of passengers along the highway as well as dangerous crossing of the road on foot by commuters.

He reiterated that the need for the construction of the wall, which is similar to the same measure taken between Ketu and Mile 12 axis of the road is meant to reduce fatalities on the part of commuters crossing the highway and the traffic gridlock caused by commercial buses and motorcycles engaging in indiscriminate dropping and picking of passengers.

While commending the orderly conduct of commuters in the usage of the bridge, the statement urged them to be patient with government until the new one is constructed, adding that the project is expected to be delivered within three months.

Ayorinde added that the new bridge will accommodate the special needs of the physically challenged, for their ease of movement. 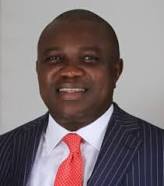 The Lagos State government will in July organise an inter-religious conference to foster unity, Governor Akinwunmi Ambode said at the weekend.

The governor, represented by the Permanent Secretary, Ministry of Home Affairs, Mrs. Grace Oladimeji, said his administration was determined to promote religious harmony.

He spoke at the 20th Convention Annual Anniversary of the Overcomers Pentecostal Prayer Ministry, with the theme: ‘God of Abraham’, held at the church auditorium in Abule-Egba, Lagos.

He added: “This is why there is peace between Christians and Muslims in this state.”

The governor hailed Dr. Sam Ogedengbe for weathering the storm since establishing the church 20 years ago.

He said Ogedengbe; the senior special assistant to ex-Governor Babatunde Raji Fashola on Religion (Christian) should be praised for promoting unity.

Ogedengbe, the national president of the All Christian Leaders & Ministers’ Forum (ACLMF), thanked those who stood by him since the establishment of the church.

Ambode’s Chief of Staff Olukunle Ojo and Senator Gbenga Ashafa were some of the awardees at the event.

Lagos to install ten thousand CCTV cameras across the state

Lagos state government says it has concluded plans to install ten thousand CCTV cameras across the state to enhance security in the state. The state Commissioner for Economic Planning and Budget, Akinyemi Ashade, stated this while giving a breakdown of the 2016 budget, tagged ’The Peoples’ Budget’ before newsmen.

Speaking on the need to beef up security and maintain law and order, the Commissioner said the state has committed about twenty-three billion naira for the maintenance of law and order, and to support security services in the area of vehicles, security gadgets and logistics.