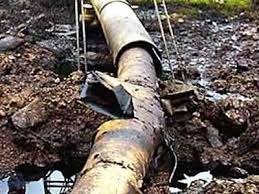 The Nigeria Security and Civil Defence Corps, Kwara State Command, has intercepted a group of vandals at Alase Community behind University of Ilorin teaching hospital, when they were vandalizing product suspected to be Petroleum product from the pipeline.

In a statement released by the NSCDC and signed by the public relation officer, DSC Ayeni Olasunkanmi, the vandals succumbed and took to their heels, after a serious gun duel, leaving behind the truck and ten jerrican  loaded  with suspected petroleum product.

While the investigation is still ongoing, the state Commandant, Bello Ale, called on the local communities, Traditional rulers, Youths and members of the public along the pipeline areas to assist the corps with proactive and useful information that could be of help in curbing the activities of the vandals and other criminal activities in and around the state.

He further appreciated the state government and solicited for more support in the quest to provide the good people of Kwara with an efficient security service.