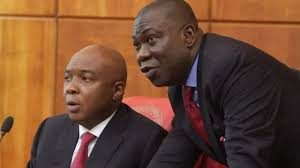 The All Progressives Congress in Kwara State on Tuesday said it supported the Senate President, Dr. Bukola Saraki’s view that there is a government within the government of President Muhammadu Buhari. The party also faulted the President’s response in a statement by his media aide, Mr. Femi Adesina.

The party made this known in a statement by its state Publicity Secretary, Alhaji Sulyman Buhari. The APC said it expected the Presidency to embrace introspection and take right steps in the interest of the nation instead of embarking on a futile drive to denounce and dismiss the obvious.

This, according to the publicity secretary, is to forestall the wrath of Nigerians who are getting weary of excuses for the numerous challenges facing the country. Alhaji Buhari urges the Presidency to remember that a cabal hijacked and destroyed the government of ex-President Goodluck Jonathan.

While calling the President’s response unpresidential, Alhaji Buhari also accused Adesina of trying to create discord between the President and the Senate leadership.