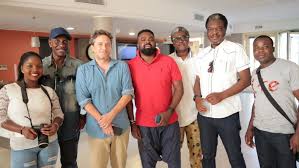 Nigerian actor and film producer, Kunle Afolayan, has sealed a production deal with Cape Verde for ‘Citation’, his forthcoming movie poised to explore the prevalence of sexual harassment in higher institutions.

The forty-five-year-old movie director has also sealed a production deal with Senegal ahead of a proposed January 2020 shoot and as part of his bid to forge a stronger collaboration with African countries using films. This move has seen him and his crew meet up with top government officials in both countries.

Afolayan said that apart from its thematic premise, ‘Citation’ will also serve to market Cape Verde to Nigerians and the rest of the world while also establishing a film and cultural affinity between the two countries.

Afolayan’s movie, which is to be shot primarily in Nigeria and comes on the heels of his much-acclaimed ‘Mokaliki’, would feature scenes spanning the three countries.

“Citation” is a University drama surrounding a female postgraduate student who has to find a way of dealing with the awkward situation of sexual harassment from a popular male lecturer.