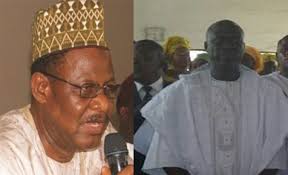 The kidnapped  Kwara State  Chairman of the All Progressives Congress, Ishola Balogun- Fulani and Secretary of the party, Bode Adekanye, have been freed.

This was continued in a statement issued by the Kwara APC Publicity Secretary, Sulyman Buhari, on Saturday.

According to Buhari, the duo was rescued by the Kogi State Police Command in collaboration with other security agencies at about 6.30pm on Saturday.

He said the APC chieftains were freed without any ransom paid.

He added that the freed party chiefs would spend the night in Lokoja and return to Ilorin Sunday (today).

He said the collaborative efforts and synergy between the Nigeria Police and other security agencies in the country led to the release of the duo.

He stated that the state chapter APC hailed security agencies for securing what he called the “unconditional release” of its leaders as swift as possible.

He added that party also appreciated the support and prayers from members of the APC across the country.

The Balogun-Fulani and Adekanye were kidnapped by unknown gunmen at Okene along Abuja on Friday as they were returning from Abuja to Ilorin, the Kwara State capital.

Party members and government official on hearing of the news of the release of the two party chiefs had erupted into jubilations and celebration.

A close aide of Adekanye had confirmed to journalists in Ilorin on Saturday that the abductors late night on Friday demanded to be paid N50m.

The source said they pleaded with the abductors to accept N10m but the kidnappers rejected the offer.

He stated that a delegation had been dispatched to negotiate with the abductors.

“Our people were on their way to Okene-Lokoja axis for a possible location of the abductors’ hideout with a view to paying the ransom and securing the release of our chairman and secretary,” he said.