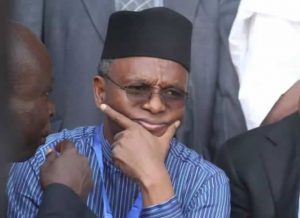 The Kaduna State Governor, Mallam Nasir el-Rufai, on Wednesday, at the maiden economic summit of the state, said the gold deposit in the state was bigger than South Africa’s gold reserves.

The governor noted that the new vision of his administration was to make the state a haven of abundant investments, economic opportunities and prosperity, calling on investors to take advantages of such opportunities in the state.

The governor spoke during the opening ceremony of the first Kaduna Economic and Investment Summit held at the Umaru Musa Yar’Adua Hall, Kaduna.

El-Rufai said unlike Nigeria that relied heavily on petroleum proceeds as its main economic power, South Africa depended on mineral deposits as the mainstay of its economy.

He added that his administration had put in place mechanisms to  ensure adequate peace and security, good governance, improved quality of lives,  and social inclusion for the people and investors .

The governor stated, “We have just found out that there is more gold in the Birnin Gwari Local Government Area of Kaduna than in South Africa.

“We are discussing with a big international mining company to come and explore our gold reserves in Kaduna State.

“We are focusing on mining and agriculture in creating jobs in this state. The mining company we are discussing with is going to train our local miners and will group them into cooperatives so that they would become like sub-contractors to them and be able to work with them. We are working with the Federal Government very closely to ensure that this happens.

“In its breadth and scope, the plan leaves no one behind. Children, young adults and the elderly have the state as an ally for the pressing needs of their status.

“This is not utopia, but a deliberate, incremental improvement to enhance the living statdard of our people.”

He, however, added that his administration was committed to tackling the challenges that currently faced the state, noting that Kaduna, as a capital city of the northern states, had lost up to 70 per cent of buoyant economic activities.

El-Rufai said the poor infrastructure, insecurity and unconvincing policies had deterred investments, noting that his administration would do everything possible to ensure that the state become great again.