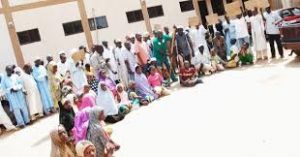 Beggars stormed the secretariat of the Kaduna Council of the Nigeria Union of Journalists along Muhammadu Buhari Way, on Wednesday with a demand that the state Governor, Mallam Nasir el-Rufai, should fulfill his campaign promises, and also pass the State Disability Bill into law before placing a ban on their activities. The beggars said they would not stop the strike until their requests were met.

The Chairman, Concerned Citizens with Disabilities, Julius Shemang, said the passage of the street begging and hawking bill without palliatives measures contradict the agreement the beggars reached with the state government. The governor had last week assented to the bill banning street begging and hawking in the state. However, efforts to get his reaction to the beggars’ strike were futile.