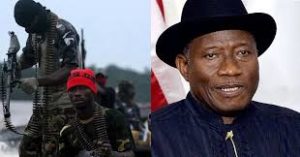 The Reformed Niger Delta Avengers says former President Goodluck Jonathan formed the Niger Delta Avengers in 2014 during the build-up to the presidential election. It threatened that should Jonathan deny being the NDA sponsor, it would reveal more details of their relationship. According to an online report, the threat was contained in a statement by the spokesperson for the RNDA, Cynthia Whyte.

This is coming a day after another militant group; the Movement for the Emancipation of the Niger Delta claimed in a statement that Jonathan was sponsoring the NDA to destabilize the government of his successor, President Muhammadu Buhari. Jonathan has however denied the accusation and said it was part of a plot to assassinate him.