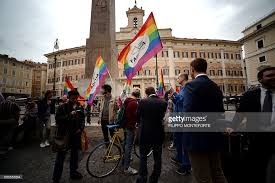 Italy’s parliament has backed same-sex civil unions in a vote of confidence for centre-left Prime Minister Matteo Renzi. Until Wednesday’s vote Italy had been the last major Western democracy not to legally recognize gay partnerships. The issue has been highly controversial in Italy, amid staunch opposition from Catholic conservatives.

MPs in the lower house voted three hundred and sixty-nine to one hundred and ninety-three for the government, ensuring that the civil unions bill will become law. Ahead of the vote, Mr Renzi wrote on Facebook that “today is a day of celebration for so many”. Final approval of civil unions is expected later, but that vote by MPs is seen as a formality, as the confidence vote was the crucial hurdle.