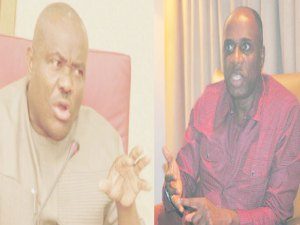 Governor Nyesom Wike of Rivers State has made it categorically clear that he will not complete the controversial forty billion naira monorail project started by his predecessor, Rotimi Amaechi. The governor, while speaking during a special appearance on television programme on Easter Monday, said he will not waver in his commitment to the completion of the numerous projects left by Amaechi, but that the monorail project will not be one of them.

He also defended his statement that those coming to the state for the rerun election should “write their will.” The governor has been under severe criticisms, especially from the main opposition party who says that statement is an evidence of his support for violence. Wike however noted that the statement is in reference to those who might have sinister intention.

Wike also claimed that the Independent National Electoral Commission (INEC) collaborated with the All Progressives Congress (APC) to employ ad-hoc staff that handled the re-run election of Rivers State. He said that he had written to the INEC before the election, raising some issues that were bordering on possible chances of irregularities in the election.

“Before the re-run date, we have heard some information concerning the preparation of INEC on a collaboration with APC to employ ad-hoc staff that will help the APC to rig the election.

“In February, I wrote a letter to INEC chairman, alerting him of the information and that we think that it would not be proper if that happens.

“I indicated that since it was a re-run election, it would be okay to get ad-hoc staff from other states,” he explained.

He further said that INEC did not respond to his letter.

“I did not get any reply, so I called the chairman to ask why.

“He said that the integrity of the INEC must be maintained and that no staff would be compromised.

“Sometimes in March, I got an information that the INEC had pencilled down lecturers and staff of the University of Port Harcourt who are also members of the APC.

“I got the list and I wrote another letter to the Chairman of INEC attaching the list of those persons that are members of the APC,” the Rivers State Governor stated.

He also claimed that in-laws of those that were contesting in the re-run were made collation officers by INEC.

“We indicated it and said this is not right,” he stressed.

Mr Wike also said the Resident Electoral Commissioner of INEC in Rivers State denied their claims and said there was nothing like that.

The Governor said that he had made it clear that the State government was prepared for a free and fair election to ensure that there would be no grievances after the election.