I received funds from ex-NSA but not #Dasukigate – Okupe 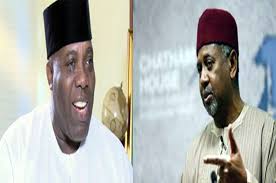 A former Senior Special Assistant on Public Affairs to ex-President Goodluck Jonathan, Dr. Doyin Okupe, has revealed that his office was funded monthly by the embattled former National Security Adviser, retired Colonel Sambo Dasuki. Okupe said this on his official Twitter handle. He, however, said he had nothing to do with the arms scam which cost the country over fifteen billion dollasr in stolen funds. It had been reported in January that Okupe got at least one-point-six billion naira off Dasuki in three shady cyber security contracts.

Meanwhile, a former Minister of Aviation, Chief Femi Fani-Kayode is expected to be grilled by detectives at the Economic and Financial Crimes Commission today. Fani-Kayode, who was the spokesperson for the Goodluck Jonathan Campaign Organization, during the 2015 presidential election, was invited by the EFCC for receiving eight hundred and forty million naira during the build-up to the election.