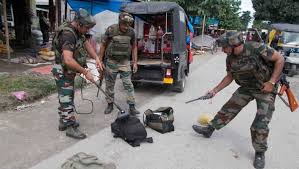 Gunmen have opened fire on a busy market place in India’s north-eastern state of Assam, killing at least thirteen people and wounding more than a dozen. Assam police Chief Mukesh Sahay said one assailant was killed during the attack today and security forces are in pursuit of three or four suspects believed to be hiding in a nearby forest.

Though no group has yet claimed responsibility, Sahay blamed the attack on the outlawed National Democratic Front of Bodoland, (NDFB) an armed group that has fought for decades for a separate homeland for the indigenous Bodo tribes people in Assam.

A second police official said that six attackers arrived in a motorized rickshaw and opened fire with automatic weapons and lobbed grenades into the crowded market in Balajan, just outside Kokrajhar town.

Three days ago, police arrested members of the Bodoland front with a cache of weapons in the same area as today’s attack.  The Bodos are an indigenous tribe in Assam, making up ten percent of the state’s thirty-three million people.