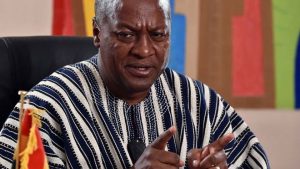 Ghana’s President John Mahama has warned against panic after a leaked security memo revealed that militant Islamists were planning to attack the West African state.

The memo said the information was obtained from a man held in Ivory Coast over last month’s deadly attack on a beach resort in the country.

It also warned of a possible attack on neighbouring Togo.

Ghana and Togo have never been attacked by militant Islamists.

Ivory Coast was hit for the first time on 13 March when gunmen killed at least 18 people at the Grand Bassam beach resort, which is popular with locals and foreigners.

Al-Qaeda in the Islamic Maghreb (AQIM) said it carried out the attack.

Mr Mahama said the memo highlighting the threat to Ghana should not have been leaked to the media.

“We must deal with this without creating panic amongst our people,” he told state radio.

Mr Mahama asked for public vigilance and said Ghana was also at risk from home-grown militants, Reuters news agency quotes him as saying.

In a memo dated 9 March, Ghana’s Immigration Service called for security to be stepped up along the northern border with Burkina Faso.

“The choice of Ghana, according to the report, is to take away the perception that only Francophone countries are the target,” said the memo, which has been widely published in the local media.

The memo said the attack on Grand Bassam, about 40km (25 miles) from Ivory Coast’s commercial capital Abidjan, was reportedly carried out by gunmen who entered from Mali, using vehicles registered in Niger, with weapons and grenades concealed in the “compartment for spare tyres, padded with cushions and bubbled wraps to keep them stable and prevent noise”.

AQIM had been behind two other similar attacks in former French colonies in West Africa in the last five months, targeting hotels in Mali and Burkina Faso.