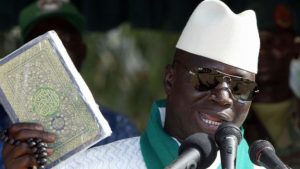 Gambian President Yahya Jammeh has scrapped a decree which ordered female government employees to cover their hair at work. The ban, imposed on 4 January, was resisted by opposition groups.

It was lifted because it made women “unhappy”, his office said in a statement, adding that they were his “best friends”.

He said the move was in line with the nation’s “religious identity and values”.

A memo published in the pro-opposition Freedom and JollofNews newspapers, dated 4 January, said that an “executive directive has been issued that all female staff within the government ministries, departments and agencies are no longer allowed to expose their hair during official working hours”.

But on Thursday, Mr Jammeh’s office said that the government’s initial ban had had “nothing to do with religion” and that women should not be upset by it.

The Gambia is popular with Western tourists because of its beaches. About 90% of Gambians are Muslim – and many Muslim scholars believe that Islam orders women to cover their hair in public.

Rights activists accuse Mr Jammeh – who has been in power since 1994 – of presiding over a brutal regime which is intolerant of dissent.

He portrays himself as a devout Muslim with miraculous powers – once claiming that he could cure Aids with a herbal concoction.