The negotiations between France’s government and a major labor union have failed to put an end to protests over labor reforms. After an hour and a half meeting with Philippe Martinez, the leader of the General Confederation of Labor (CGT) union, France’s labor minister Myriam El Khomri said that the two sides did not find consensus. 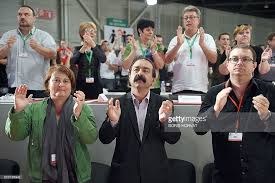 For his part, Martinez said there are points of disagreement between the CGT and the government on basic things. He stressed the union’s demand for rewriting or withdrawing several key articles of the bill.

Meanwhile, the minister has called for the suspension of the debate on the bill in the Senate, which began on Monday, in order to allow new talks to occur. The debate will wrap up on the twenty-fourth of June, with senators set to vote for it four days later.

The bill, which labour union say will make it easier and less costly for employers to lay off workers, had bypassed the lower house in May as the government pushed it through without a vote, using a constitutional tool.