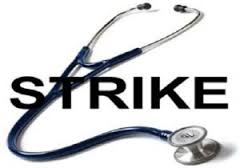 Members of the Association Resident Doctors, Federal Medical Centre Owo, Ondo State has begun an indefinite strike action after the management did not meet their demands, which includes regularizing the appointment of over twenty-two medical officers employed on casual basis Addressing journalists in Owo on Wednesday, the chairman of the association, Dr. Ahmed Olanipekun said also accused the management of calculated attempts to destroy the residency programme and alteration of the letter of offer of appointment of house officers.

This comes as members of the Association of Resident Doctors of the Federal Neuropsychiatric Hospital, Aro, Abeokuta, also commenced an indefinite strike over the non-implementation of the skipping of Consolidated Medical Salary Scale for medical doctors by the hospital management. A press release, signed by association’s President, Dr Walter Nzeakah, General Secretary, Dr Sewanu Awhangansi and Public Relations Officer, Dr Mojisola Adeniji, said that with the non-implementation the doctors were only getting a fraction of their salary.