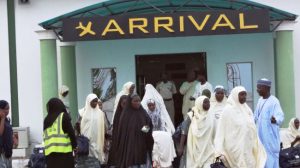 Five intending Kwara Pilgrims to 2016 Hajj faced interrogation for hours by the Officials of the state Muslim Pilgrims Welfare Board over the discovery of Kolanuts and palm oil in their luggage.

Justice ldrees Haroon who is the Amirul Hajj for 2016 pilgrim disclosed during an interview with newsmen in llorin. He said the five Pilgrims among whom were three women were caught at the point of departure at the llorin international Airport.

The Amirul Hajj wondered why the Pilgrims failed to abide with series of warning given them during various enlightenment programmes. After serious interrogations, the five pilgrimages were later allowed to leave for the holy land.

As reported by royal FM correspondent Olarotimi Oshin, the Amiru Hajj however warned the remaining intending Pilgrims against carrying Kolanuts and palm oil among the approved luggage.