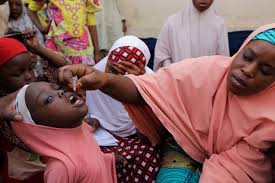 The Federal Ministry of Health supported by the WHO, UNICEF and partners of the Global Polio Eradication Initiative have rolled out an emergency Polio immunization campaign in Borno.

He said the outbreak occurred in the conflict-ridden state where children are already facing dangerously high levels of malnutrition. Porter said that Nigeria had its last confirmed polio case two years ago and was within a year of being certified polio-free because of massive mobilization by government, partners and local health providers.