FG to save over eight billion dollars through food storage technology

Written by Morenike Adebayo on September 16, 2016

The Minister of State for Agriculture, Senator Heineken Lokpobiri has said that the Federal Government will save eight billion dollars through new storage technologies developed by the Nigerian Stored Products Research Institute, llorin (NSPRI). He disclosed this when the Executive Director of NSPRI, Professor Olufemi Peters and his team visited the minister, in Abuja.

Lokpobiri said that the institute has been able to develop technologies that will reduce storage problems of all food crops in the country. He added that the development will aid Nigeria’s target of self-sufficiency in food production through reduction in post-harvest losses.

Lopkobiri recalled that findings from 2013 Food and Agriculture Organisation (FAO) factsheets and NSPRI survey conducted in all geo-political zones, estimated food losses to be fifty-one-point-three tonnes across all crops; valued at eight-point-nine billion dollars.

The minister said that the present administration of President Muhammadu Buhari has achieved increased food production and is addressing post harvest losses along all the value chains. The minister said the initiative is a sure path to food security for the country and will enhance exportation of agricultural produce which will boost foreign exchange reserve.

Written by Morenike Adebayo on April 4, 2016 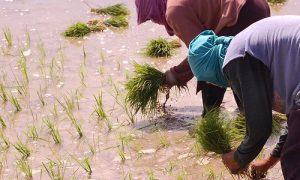 Sanginga, who disclosed this in an interview with the News Agency of Nigeria (NAN) in Ibadan, said the scheme would be sponsored by the federal government and African Development Bank (AFDB).

The director-general said IITA would train those enrolled in the scheme, adding that beneficiaries would be trained on how to make agriculture a business with good networking.

“The programme tagged “Enable Youth Empowerment Agribusiness programme, will engage youths in agribusiness for 18 months to enable them learn how to make agric business plan.

“The programme started by IITA in 2012, was taken over by the federal government and AFDB to create employment in agric sector.

“To support this objective, the programme will be extended to 36 states and Abuja in September.

“After the programme, we expect the youths to become chief executive officers of factories, companies and creators of jobs rather than job seekers,” he said.

Sanginga urged the youths to develop positive mindset in agriculture and take good advantage of the programme.

“They should be serious with the training because at the end of it only those who did well will be rewarded,” he said. (NAN) 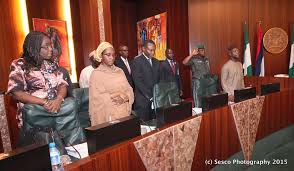 The Nigerian government says it will inject 350 billion Naira into the economy in the next few months to stimulate it. The government’s plan was announced at the end a two-day National Economic Council (NEC) retreat held at the Presidential Villa, Abuja, the nation’s capital.

Explaining that the Federal Government is keen at using the 2016 budget to fast-track economic diversification, the Minister of Finance, Mrs Kemi Adeosun, said efforts had been put in place to ensure that the spending on the capital projects trickles down to all Nigerians.

Mrs Adeosun, in her paper at the second day of the National Economic Council retreat in Abuja, said the Federal Government has a platform and system of control in place to ensure transparency. Spending will not be reckless.

With this huge spending, the minister believed that companies that had laid off staff and those that had abandoned projects are going back to sites and the economy will bounce back.

The Minister further urged state governments to take their destinies in their own hands by proactively driving revenue generation, saying “now is the time to put in place a robust revenue drive by the states”.

Mrs Adeosun also stressed the need for the Nigerian government to look at data management, saying “nobody can succeed in revenue generation without the numbers. It is important to report accurately and understand the billings versus the revenue coming in”.

She told the gathering that the Finance Ministry had already strengthened the Post-Mortem Sub-Committee of the Federation Account. Speaking on the plans for the Customs service, the minister said the Federal Government has agreed to review the remunerations of the Customs Service.

Some other resolutions reached at the retreat which she read out to reporters were focused on increasing Internally Generated Revenue and fostering collaboration between Federal and State Inland Revenues to ensure there was an alignment.

The retreat was said to have been muted by the Nigerian Governors Forum to find a solution to the economic problems they had faced over time.

FG to give N60bn loan to one million artisans

In his bid to ensure the successful take off of the social protection programmes promised by his administration, President Muhammadu Buhari has approved the appointment of Mrs. Maryam Uwais as his Special Adviser for Social Protection Plan.

Uwais, a lawyer with over 20 years’ experience, is said to have already started work in the office of the Vice President.

A top Presidency official who pleaded anonymity disclosed this to selected journalists in Abuja on Sunday.

The official said the 2016 Budget proposal was loaded with provisions for the implementation of the social programmes, hence the reason why “the Presidency is seeing the current controversy in the Senate regarding two versions of the proposed budget as a distraction and a storm in a tea cup.”

“The budget sent out by the Presidency is a bunch of proposals which would only become sacrosanct relatively after it has become an appropriation. To now have all this hue and cry on alleged versions, and switched copies is not just a distraction, but a storm in a tea cup,” he said.

For instance, the official said a provision had been made in the budget to grant a one-time soft loan of about N60,000 each to one million market women, men and artisans in 2016.

The official said there were important components in the budget proposals which should be discussed including the soft loan, which he said, was the micro-credit component of the Buhari’s Social Protection programmes.

This component, according to the official, will gulp about N60bn and is one of a six-point social protection programme of the administration.

He added that the details of the implementation of the micro-credit scheme were being worked out and would be rolled out once the budget must have been approved by the National Assembly.

He also said there were five other social protection schemes identified to be coordinated by Uwais with an effective inter-ministerial involvement.

“Besides the micro-credit scheme, there are five other social investment plans of the Buhari administration already provided for in the budget with about N500bn, or an unprecedented nine per cent of the total budget.

“It is believed that this is the first time that the Federal Government is spending this much on targeted social welfare scheme,” he said.

He listed the five other schemes to include the Teach Nigeria Scheme; the Youth Employment Agency; the Conditional Cash Transfer Scheme; the Home Grown School Feeding Initiative and Free Education Scheme for Science Students.

Under the Teach Nigeria Scheme, the official said the Federal Government planned to employ 500,000 graduates as teachers.

“Under the scheme, government will hire, train and deploy the graduates to help beef up the quality of teachers in public schools across the nation. The selection of the 500,000 teachers is likely to be on states and FCT basis,” he explained.

Under the youth employment agency, he explained that between 300,000 and 500,000 non-graduate youths would be taken through skill acquisition programmes and vocational training, for which they would be paid stipends during the training.

The trainees, he said, would be expected to become self-productive members of their communities. The selection of the youths for this scheme, according to him, would also be per states and the FCT.

On the Conditional Cash Transfer, the official said government would pay N5,000 per month directly to one million extremely poor Nigerians this year on the condition that they had immunised children enrolled in schools.

While describing the CCT as the most misunderstood of the schemes, he clarified that it would only be for extremely poor people.

He also said the pilot scheme for the homegrown school feeding would start with a number of states drawn from across the country, and then developed to cover the entire country.

In the 2016 proposed budget, provision is said to have been made to implement this year on a pilot scheme basis.

He said the programme also had international supports from the global community including the Imperial College of the United Kingdom.

The minister added that by Wednesday, five persons had died including four Nigerians, seven had been managed successfully and discharged while one person remained under treatment.

The Federal Government will offer free healthcare delivery to sixty million poor Nigerians in the coming two years. The Minister of Health, Professor Isaac Adewole, made the declaration while speaking in Ido-Ekiti, in Ekiti State.

He also announced that ten thousand primary health facilities would be built in all the local government areas in the country for effective service delivery to the people and to decongest the tertiary institutions.

Adewole was at the Federal Teaching Hospital, Ido-Ekiti (FETHI), to inaugurate twelve projects initiated and completed by the administration of Dr Majekodunmi Ayodele, the Chief Medical Director (CMD).

The minister expressed displeasure at the incessant strikes in the federal health institutions in the country and warned that the medical personnel should desist as the act was killing the health sector and reducing its quality.

Dr Ayodele, who assured the agitated workers that all their dues will be paid, appealed to the Ministry of Health to grant the request for the payment of take off grants to the hospital as a former medical center and for its new status as a teaching hospital.