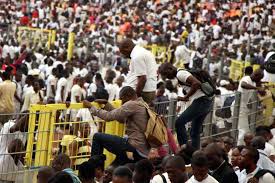 The Federal government has banned any kind of payment for forms for civil service jobs. The Director for Legal Services and Prosecution from the Federal Character Commission, Oluwatosin Bodunde, said the government made the decision following the March 2014 Nigerian Immigration Service recruitment tragedy.

She disclosed this at a one-day public hearing on two resolutions of the House of Representatives entitled: Extortion of Unemployment Seekers by Government Agencies- Recruitment Firms and Call for State of Emergency and Legislative Intervention on the Employment Crisis in Nigeria.

Bodunde explained that aside from the military and the police which were given waivers due to the peculiarity of their recruitment process, the FCC had ensured that it’s August 2014 circular banning the payment for forms or scratch cards by applicants was fully enforced in the Ministries Departments and Agencies (MDAs).

Also speaking at the hearing, representative of the Federal Civil Service, Clement Assam said the commission has put in place institutional mechanisms to protect applicants from extortion. He however admitted that only a fraction of unemployed graduates can be absolved into the civil service. The public hearing was conducted by the Ezenwa Onyewuchi-led House Committee on Labour, Employment and Productivity.