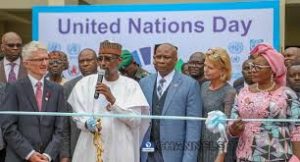 In celebration of United Nations Day, the Federal Government has handed over the renovated UN building to the global body. The event which was held today in Abuja was also marked with the significant laying of a wreath for victims of the 2011 car bomb explosion.

The UN building was renovated by the Federal Government after the bomb attack on August 26, 2011, which left at least 23 dead and 60 others wounded. The new building was commissioned by the Minister of FCT, Muhammed Musa Bello who represented President Muhammadu Buhari.

United Nations resident coordinator for Nigeria, Mr Edward Kallon at the event said he believes Nigeria has the capacity and resources to achieve the Sustainable Development Goals (SDG) by 2030. Kallon added that the Nigerian government needs to mobilize the required resources and adopt an unusual approach to achieve the goals.

The United Nations Day, celebrated all over the world on the twenty-fourth of October, marks anniversary of the entry into force in 1945 of the UN Charter which ratifies the founding document by the majority of its signatories.