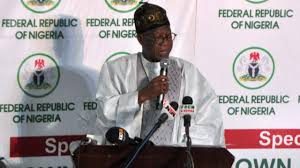 The Federal Government says it has commenced the process of injecting sanity into the Social Media space to prevent it from setting the nation on fire.

The Minister of Information and Culture, Alhaji Lai Mohammed today in Abuja, said that the government welcomed the criticism that trailed its earlier announcement to sanitize the social media space and the airwaves and has consequently written letters to the major stakeholders who will give recommendations on the implementation process.

The minister noted that those who had opposed the regulation of the social media had not denied the fact that the platform was being used by purveyors of fake news and hate speech. He allayed fears that the Press freedom would be stifled, noting that the government does not intend to use the social media regulation to gag the media.

Mohammed further said that Nigeria is not the only country where the social media is being regulated, adding that countries like Germany, Egypt, Russia, India and the UK do same.

The minister reiterated that no amount of criticism and opposition would stop regulation of the social media and the air waves. Mohammed noted that the government has the responsibility to keep the country together; therefore, social media will not be left alone to destabilize the nation.