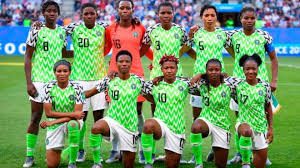 The Super Falcons depart for Abidjan today for the first leg second round of the 2020 Olympics qualifiers against Ivory Coast, without head coach, Thomas Dennerby, who has been at loggerheads with the Nigeria Football Federation.

According to a statement by the NFF, Dennerby’s assistant, Christopher Danjuma, who has been the acting coach, will lead the players. Dennerby had dumped the Falcons and returned to his home country Sweden after falling out with the federation.

According to reports, the coach was said to have dumped the team over claims he wasn’t getting the backing of the federation. The Swede was said to have complained over the usage of some of the players for the Africa Games in Rabat, Morocco, without the NFF informing him.

Minister of Youth and Sports, Sunday Dare, promised to wade into the situation and restore normalcy, but his efforts did not yield any results. Dennerby has since refused to return to the country. In the squad for the match billed to hold on Thursday are seven overseas-based and 11 home-based players.

Nigeria defeated Algeria three-nil on aggregate in the first round to qualify for the second round of the qualifiers. The second leg will be played at the Agege Stadium, Lagos on October 7.