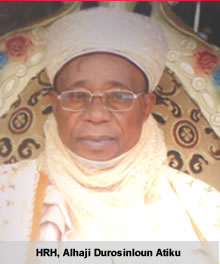 The Emir of Ilorin and Chairman of the Kwara State Traditional Council, Alhaji Ibrahim Sulu-Gambari, has expressed sadness over the demise of the Balogun–Fulani of Ilorin, Alhaji Durosinlohun Atiku. Alhaji Atiku who passed away today was on until his death the most senior Balogun in the Ilorin Emirate Council.

The monarch in a statement issued by the National Secretary of Shehu Alimi Foundation for Peace and Development, Mallam Abdulazeez Arowona described his death as shocking. Alhaji Sulu-Gambari described the deceased as a competent and loyal Chief whose wealth of experiences will be highly missed in the administration of the Ilorin Emirate Traditional council.

Senate president Bukola Saraki and the Kwara state governor, Doctor Abdulfatah Ahmed have also expressed deep sadness over the passage of the Balogun Fulani, describing his death as a huge loss to the Ilorin Emirate, the government and people of Kwara state and the entire country.

The Speaker of the State House of Assembly, Doctor Ali Ahmad in his message commiserated with the Emir and Emirate Council over the demise of the Balogun-Fulani.