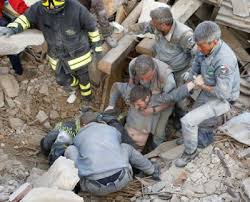 At least two hundred and sixty-eight people are now known to have died and four hundred were injured. Teams have continued to search the rubble of toppled buildings for a second night.However, hundreds of aftershocks have hampered the efforts of the five thousand rescuers.Another magnitude-four-point-seven tremor struck early today.

Bodies are still being found in the town, including one discovered in the rubble of the Hotel Roma in the city late on Thursday. An official with the fire department, Lorenzo Botti, admitted they are facing a race against time.

Mr Botti said that the chances of finding people alive in this type of setting, is challenging. But other rescuers said there is still hope, noting that one survivor was pulled from ruins in L’Aquila in 2009 three days after an earthquake that killed more than three hundred people.