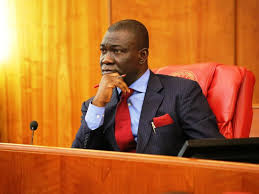 He alleged that the Nigerian government is making attempts to silence him as the leader and highest ranking member of the opposition in the country, all in the name of prosecuting an alleged forgery case.

In a two-page letter, Ekweremadu insisted that neither his name nor that of the Senate President featured either in the petition by the aggrieved members of the Senate Unity Forum (SUF) or during the investigation of the petition by the police. He wants the international community, to after perusing the facts before them, decide whether or not the trial is justified or one purely borne out of political vendetta.

Meanwhile, the Attorney-General of the Federation, Mallam Abubakar Malami, has been invited again to appear before the Senate Committee on Judiciary, Human Rights and Legal Matters tomorrow for the second time over the alleged forgery case.