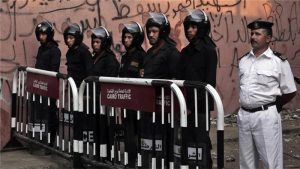 Egyptian authorities have arrested activists two weeks before the fifth anniversary of the January 25 uprising, which led to the deposing of President Hosni Mubarak. According to lawyer Mukhtar Munair, three activists including Taher Mokhtar, a prominent physician, were detained after police raided their apartment in downtown Cairo on Thursday.

Omar Hazek, a poet, was also detained and banned from leaving the country, a relative said in a Facebook posting, the Associated Press news agency reported. The managing editor of a privately owned news site called Masr al-Arabia was arrested after security forces raided their office on Thursday, according to a statement from the site.

Egypt has launched an extensive crackdown on both Muslim Brotherhood and liberal activists since the 2013 military deposing of President Mohammed Morsi. Morsi, who belonged to the Brotherhood, was arrested and put on trial with most of the group’s leader ship and thousands of its supporters.

A number of high-profile liberal activists have also been arrested and jailed, including Alaa Abdel Fattah and Ahmed Douma, for their criticism of the country’s military and President Abdel Fattah el-Sisi. January 25 marks the anniversary of the first day of mass protests in Cairo’s Tahrir Square in 2011.

Tens of thousands of Egyptians convened in the area demanding Mubarak step down, which he did shortly after on February 11. Last year at least 20 people were killed in clashes with police on the anniversary of the uprising.