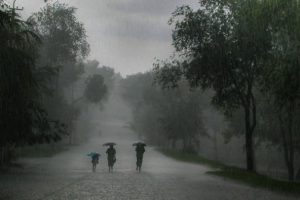 Dutse, the capital of Jigawa, on Sunday recorded the first rainfall of the year. The News Agency of Nigeria (NAN) reports that the heavy downpour, which started around 3:50 pm, lasted for an hour and fifteen minutes. It was observed that people in the neighborhood were congratulating one another over the rainfall.

Mrs Zainab Abubakar, a housewife living in Kargo quarters, told NAN that the rainfall had cooled down the hot temperature in the area. Abubakar said that it had been difficult for residents to cope with the hot weather condition of the place but they would now ‘heave a sigh of relief.’ Another resident, Malam Rabiu Musa, told NAN that if the rainfall continues without any break, he would commence planting in good time this year.