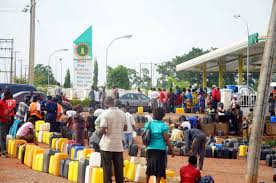 At least thirty Jerry cans filled with petroleum products were yesterday confiscated by the Department of Petroleum Resources in Ilorin, Kwara State capital, in its bid to rid the state of black marketeer of petroleum products.

The seizure of the products followed a raid carried out in some shops by a special task force set up by the department. Prior to the raid, major streets in Ilorin metropolis had been flooded by black marketers in the wake of the fuel crisis that has hit the town for over four months now.

More than fifteen Jerry cans loaded with petrol otherwise known as premium motor spirit were seized at Maraba market when the operatives forced open some shops where the products were kept.

Speaking at the end of the raid, the state Operation Controller of DPR, Mr Salvation Philip, who led the team, said the department was concerned with the creation of illegal market for petroleum products.

He also warned that the agency will not fold its arms to allow a parallel market in the petroleum industry. He stated that the business of the products must be done in line with extant regulation of the petroleum law.