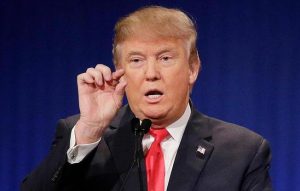 Donald Trump has vowed to tackle multiple threats facing the US, in his speech in Cleveland, Ohio while accepting the Republican presidential nomination.  The businessman promised his presidency will usher in a new era putting America and ordinary people first.

Mr Trump’s nomination has been clouded by the refusal of major party figures like Senator Ted Cruz to endorse him. Other Trump opponents such as members of the Bush family stayed away from the convention altogether.

Mr Trump, a New York businessman who was written off when he launched his campaign a year ago, said he hoped his speech would ease tensions and unite the party.

He attacked his Democratic rival, Hillary Clinton, at every opportunity, blaming the former secretary of state for “death, destruction and weakness”. Not long into his speech, the audience began calling for the jailing of Mrs Clinton, chanting “Lock her up!” He promised to defeat her in November.