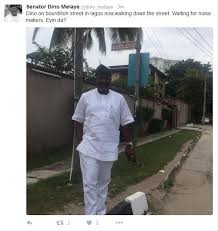 The Senator representing Kogi West senatorial district, Dino Melaye has taken the ‘battle of words’ to the doorsteps of the National Leader of the All Progressives Congress (APC), Senator Bola Tinubu. Earlier in the week Dino Melaye had allegedly threatened to ‘impregnate’ and ‘beat up’ Tinubu’s wife, Senator Oluremi Tinubu during an argument between both parties at the Senate.

Melaye on Saturday, posted some pictures on his Twitter account showing him at Bourdillon road, Ikoyi, the street where Tinubu resides, in what can be described as a show of force.