Written by Morenike Adebayo on April 6, 2016 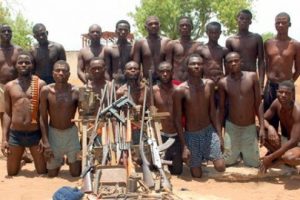 The Defence Headquarters has established a rehabilitation camp for repentant members of the Boko Haram sect.

The Acting Director, Army Public Relations, Brig. Gen. Rabe Abubakar, said in a statement on Tuesday that the rehabilitation camp established under an exercise known as Operation Safe  Corridor was designed to rehabilitate and reintegrate repentant members of the sect to the society.

He said that the terrorists would be made to go through vocational training under the exercise and empowered to make meaningful contribution to the society.

Abubakar appealed to members of the sect who were still up in arms to take advantage of the Federal Government’s gesture by embracing peace in order to benefit from the programme.

He said, “In line with the Federal Government’s commitment to the war against insurgency in the North-East and in furtherance of its efforts to rehabilitate and reintegrate surrendered and repentant Boko Haram terrorist members, the Defence Headquarters has established a rehabilitation camp in an exercise known as Operation Safe Corridor.

“The main focus of Operation Safe Corridor is geared towards rehabilitating and reintegrating the repentant and surrendering Boko Haram members back into normal life in the society.

“The repentant terrorists in the camp would be taken through various vocational training so that they could be useful to themselves and be empowered to contribute meaningfully to the economic growth of their fatherland.”

“The Defence Headquarters therefore wishes to appeal to other recalcitrant members that are still carrying arms against their fellow citizens in our nation to repent today and benefit from numerous opportunities offered by the Camp.”

The Acting Defence spokesman stressed that the military would continue to intensify the onslaught on the Boko Haram until they were completely neutralised.

He appealed to members of  the sect to avoid an impending calamity from a military mop-up by surrendering to the security agencies.

“The DHQ wishes to state further that the final onslaught against the remnant group of the terrorists would continue unabated and would not relent until the power of evil forces in the North East is completely neutralised.

The reluctant Boko Haram members should therefore see wisdom in surrendering now, thereby saving themselves from imminent calamity that is about to fall on them, in the event of military mop-up if they continue in their unwholesome acts,” he added.

However, he urged members of the public to be vigilant and to report suspicious persons, objects and movements to security agencies in the country.