There’s been an all too familiar tale of economic hardships during the COVID19 pandemic, but little about how it has impacted persons living with disabilities in Nigeria. The documentary “struggling to survive” by Babatunde Okunlola explores the situation in 2 PLWD communities in Kwara, state, Nigeria exploring issues of palliatives, data, and representation of PLWD.

On this assignment, Babatunde heads off to two differently populated communities where persons living with disabilities reside ie Koro Afoju also known as the colony of the blind) kwara state (150 years of existence) and the ECWA Leprosarium Okegbala (about 70 years of existence).

At Koro Afoju Baba a 70 year plus visually impaired man speaking about the economic effects of the Covid19 era says “if I say I have not been affected, it would be a lie. It affects everyone. The person who gives us alms does not even have to give, so automatically, it affects us. We are just managing. I have people who depend on me too for a living. Today I barely made #200 and still have mouths to feed. We are not living like we used to. It’s worse.”

At the ECWA Leprosarium at Oke Onigbin, Taibatu who has been here for over forty years by her calculations, and a former leprosy patient living with complications reduced to operating a small kiosk to residents at the leprosarium had this to say about the economic downturn: 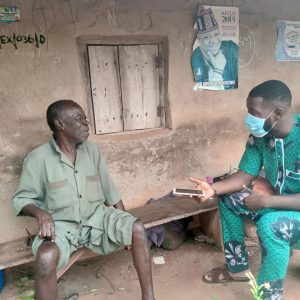 “Haa its too much. What this Corona virus situation has caused. Even my son who works as a construction worker has felt the impact. He calls regularly to give reasons for not sending me my regular food allowance. Look at my garri and rice. These are local items. I stare at them all day. When people in the community come, they plead and say ‘Mama sell for me at a minimal price, I am very hungry. I will pay after this corona virus season is over. I am left with little choices, than to help my fellow man survive. That’s what we are dealing with here.”

In July 2020, the Kwara state government stated that it had spent #500M on palliatives to mitigate the effects of COVID19 on the populace. The documentary also explores data used in its distribution for PLWD communities, as well as their impact on their lives thus far.

It is a conversation with individuals about their circumstances, but much more about issues that need addressing like the decision making processes that involve them, the much needed data to help address their needs, and empowerment for those who earn a living among them.

Speaking on welfare concerns of PLWD, Mr Agbojulogun the Chairman of Persons Living with disabilities in Kwara state, said : “If we are giving the opportunity to participate in the activities of the government, government would have recorded more achievements in the area of persons living with disabilities, because we experience the problems and we know the way out”. He also speaks extensively about the need for comprehensive data of PLWD, so as to effectively cater to the PLWD community in the state.

The documentary broadcast on Royal FM’s to over 3 million listeners who reside in 80 communities both within Kwara, and in parts of four surrounding states (Oyo, Osun, Kogi and Niger state), as well as a wide audience across the globe who listen in via www.royalfm.net, has sparked off a much needed conversation around the accountability process on palliatives which the state governement had distributed thus far. In early July, the state government said it had spent about #500M on palliatives which civil organizations had questioned. The programme’s approach of tackling these issues by focusing on palliatives distributed to PLWD showed a gap. For the first time intersecting issues of data, and need for economic empowerment as pointed out by members of the PLWD community were also brought to the fore. 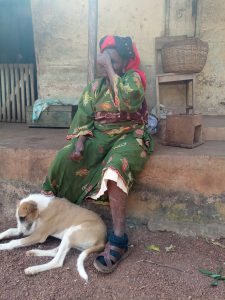 Presented with the findings from the PLWD communities, on the demand for representation by the groups, the spokes person for the COVID19 technical committee for the state, and spokesperson, and Chief press secretary to the government Mr Rafiu Ajakaiye gave an assurance to look into the matter, and engage further. He said: “We are just starting. Rest assured that his Excellency will definitely have them at the back of his mind, and he will be willing to consider their request in this regard.

Pressed further, about this assurance, he said “I am just giving them a message of hope, that they should, please hope that his Excellency will look in that direction” .

United Nations and World Bank researches reveal that persons living with disabilities constitute not less than 10% of the world’s population, and 20% of the population of underdeveloped countries. In Nigeria, the population of Persons living with disabilities is around 27 million of the nation’s 200m. According to the state chapter in Kwara, this population of registered PWD’s was pegged at 2,560 as at June 2020. The number of undocumented PWD’s is presumed to be higher than the figures quoted. Data gathering remains a challenge in most parts of the world.

The documentary “Struggling to survive” was supported by the Civic hive; an initiative of the Budgit foundation, Nigeria.

Click on link below to listen to the full programme: