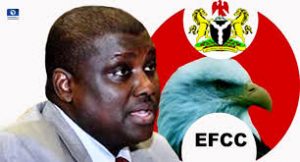 The Abuja Division of the Federal High Court has ordered the temporary forfeiture of twenty-three properties that were allegedly traced to former Chairman of the Pension Reform Task Team, Abdulrasheed Maina.

The court, in a ruling that was delivered by Justice Folashade Giwa-Ogunbanjo today, made the order following an ex-parte motion that was filed by the Economic and Financial Crimes Commission, EFCC.

Justice Giwa-Ogunbanjo directed the anti-graft agency to publish the order in a national daily to enable anyone that is interested in any of the temporarily seized assets to show cause why it should not be permanently forfeited to the Federal Government.

The Commission alleged that it uncovered the fraud which was perpetrated with names of fake pensioners, at the end of an investigation it conducted in 2010.