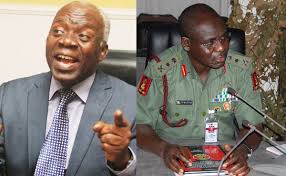 A Lagos Division of the Federal High Court has ordered the suspension of the military exercise tagged Operation Positive Identification which the Nigerian Army said it would begin this month across the country.

A human rights lawyer, Femi Falana, had filed a suit against the Nigerian Army, the Chief of Army Staff, and the Attorney-General of the Federation over the exercise. Mr Falana, asked the court to declare the operation scheduled for November 1 to December 23 as unconstitutional, illegal, null and void. He argued that the operation violates his right and that of other Nigerian citizens to liberty.

At the hearing of the matter today, the Nigerian Army and the Chief of Army Staff had no legal representation. But Mr Falana informed the court that they were duly served. Delivering his ruling, the judge ordered the defendants to maintain the status quo pending the determination of the case. He also adjourned the matter to November 18 for the substantive hearing of the matter.

The Nigerian army had announced the commencement of the exercise to check fleeing Boko Haram and ISWAP members.