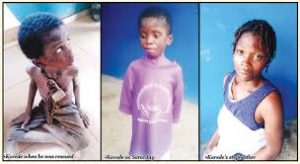 The Police in Ogun State have arrested a forty-year old man, Francis Taiwo for chaining his son, Korede for over a month at a Celestial Church in Ajibawo, Otta Local Government Area of the state. Mr Taiwo, who was ordained as a pastor of the church in 2012, was arrested a day after his son was rescued by a team of security operatives in the state. Mr Taiwo confirmed that he chained his son in order to rid the boy of his ‘stealing spirit’.

He said that he felt the young boy was possessed and after consulting with some spiritualists, he was advised to chain the boy to rid him of the evil spirit. The Police Public Relations Officer in Ogun State, Muyiwa Adejobi, says the suspect will be charged to court once investigations are concluded. The case has been transferred to the Anti Human trafficking and Child Labour Unit of the Command.