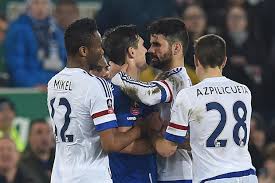 The FA has charged Diego Costa with misconduct after the Chelsea striker was sent off in Saturday’s FA Cup defeat to Everton.

Costa, who has until Thursday to respond to the charge, was shown a second yellow in the eighty-fourth minute after reacting angrily to a tackle from Everton’s Gareth Barry late in the second half.

The FA also warned that Costa has until Wednesday to explain a gesture directed to Everton fans at half-time.

His automatic one-match ban for his red card, which rules him out of Saturday’s Premier League clash with West Ham, could be extended if the charge is proven and if he is also sanctioned for the alleged gesture.