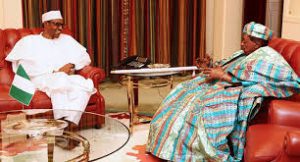 President Muhammadu Buhari on Thursday held talks with the Alafin of Oyo, Oba Lamidi Adeyemi, behind closed-doors at the Presidential Villa in Abuja. Addressing reporters after the meeting, the Alafin said they deliberated on problems facing Nigeria, including the militancy in the Niger Delta and insurgency in the northeast.

According to him, President Buhari has requested that traditional rulers in Nigeria convey their advice on problems in the nation in writing.

The Alafin said one major diplomatic point the president scored recently was the visit of the United States Secretary of State, John Kerry, stating that America does not usually send top officers for such visits if they have not used certain parameters to gauge the country’s performance.

On the outcome of the Thursday meeting, Oba Adeyemi decried what he called huge resources that were lost to the activities of the Niger Delta Avengers and commended the Federal Government for stopping them from the invasion of the south-west, especially Lagos State.