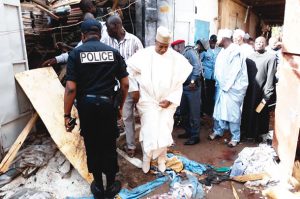 Four worshipers were killed in a suicide bombing at a mosque in northern Cameroon on Monday, a security source said, five days after a similar attack left 13 people dead.

Report said that Monday’s attack took place in the village of Nguetchewe in an area regularly targeted by Boko Haram.

“The toll of this attack is four dead and two injured,” the source, who was at the scene of the attack, told reporter on condition of anonymity.

On Wednesday last week, suicide bomber killed 13 worshipers and wounded at least one in an attack on a mosque also in northern Cameroon.

Officials said last week’s attack was suspected to have been carried out by terror group, Boko Haram.

The United States recently disclosed plans to send military supplies and troops to the Central African country to aid the fight.

“The suicide attack took place at 5.40 am in a mosque at Kouyape. There were 13 deaths, including the man, who blew himself up and one wounded,” said a senior local official, who declined to be identified.
The suicide bomber, who struck at the mosque was said to be praying alongside worshipers when he blew himself up, a security source told reporters.

“Twelve worshipers were killed at the scene. Another died of his wounds in the hospital,” the source added.

The bombing came after two people were killed overnight in the same area in another attack.

Another source close to the security services confirmed that the blast killed 13 persons including the bomber.