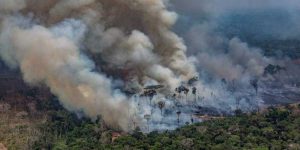 The Brazilian government has said it will reject an offer of aid from G7 countries to help tackle
fires in the Amazon rainforest.
French President Emmanuel Macron who hosted a G7 summit that ended on Monday said
twenty two million dollars would be released to tackle the fire.
But Brazilian ministers say the money is not needed and accused foreign powers of wanting
control of the Amazon.
Commenting on the G7 offer of aid, Brazilian President Jair Bolsonaro said the resources are
more relevant to reforest Europe.