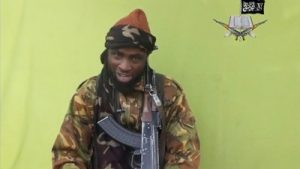 President Francois Hollande yesterday hailed ‘impressive’ military gains by Nigeria and its allies against the terror sect, Boko Haram, but said the group remains a threat.

Hollande  who spoke at a joint press conference with President Muhammadu Buhari  at the Presidential Villa, Abuja as West African and   European  leaders gathered for the second security summit on the extremists said: “The results (of the counter-insurgency) are impressive” and the rebels have been “diminished and forced to retreat.”

He added: “This terrorist group nevertheless remains a threat. This terror group Boko Haramý which massacres, terror attacks has been weakened, forced to move back, forced to lose ground. They have been chased about and they had to give up the territories they were controlling.”

He thanked President Buhari for the successes recorded by Nigeria, Chad, Niger and Cameroun and for his determination in coordinating the countries against the sect.

He said terrorism has grown largely because it “is feeding on the weaknesses of the global financial system.”

His recipe: “We therefore have to fight corruption, dwindling economy as well as tax havens.”

Continuing, the French President said:”And this has indeed an impact on the terrorist groups and their ability to finance arms trafficking as well as terror attacks.”

Asked whether enough has been done in the fight against terrorism, he said: “We have achieved major progress already ýbut this is not the end. So we shall continue to fight against all systems that enable all forms of trafficking ý- human trafficking happening in the Mediterranean, drug trafficking that has been linked with the terror activities and arms trafficking as well.

“This afternoon (yesterday) we will be discussing this at the summit and we will further discuss it at the G7 and the G20 about fighting tax havens, countries not abiding by the rules and I will be leading the discussion on this in particular at G7 next month.”

Hollande who hosted the first security summit on Boko Haram in Paris in May 2014 pledged more support for Nigeria in the fight against the sect.

It currently assists by way of intelligence sharing, training of soldiers and by provision of equipment to support the missions of the Multinational Joint Task Force.

He said: “Together with President Buhari we wanted to express all of this work ýand we have been signing a letter of intent that embodies the cooperation between these two countries. We also discussed other matters and signed agreements on technical, scientific, and cultural cooperation as well as agreements on development.

“As you may know, the French Development Agency invests a lot in Nigeria which is the first beneficiary of its loans. There are also a lot of agreements and decisions taken ýby our many businesses like Total who are strengthening their businesses in Nigeria.

“We also entered into agreements in agriculture because we are aware of the needs in Nigeria and we are aware French companies that meet these needs.”

President Buhari at the joint press conference said that the issue of security in Nigeria and in the world had become more harrowing.

He said technology was a major contributing factor to the deterioration of security across the globe.

He said: “Fundamentally, the issue of security has been more harrowing. The international terrorism now with the help of technology and millions of volunteers respect no bordersý. It is a lot of concern for people of conscience to learn that in Nigeria we have more than two million Internally Displaced Persons most of them women and children.”

While saying that Nigeria had been the main battle ground, Buhari said his administration was not aware of Boko Haram’s international colouration until it declared loyalty for ISIS.

On the achievement of his administration in the anti-terrorism war, he said: “We do appreciate the efforts, the successes recorded by this administration. I was told that a hundred articulated tankers leave Kano alone on a daily basis, seven days a week to go to Maiduguri and you have traders from Niger, Nigeria, Chad, Cameroon. So you had at least two million Nigerians, from wheel barrow pushers to traders that benefitted from Maiduguri market before Boko Haram struck.

“Now if you conduct a survey, that traffic is gradually coming back. You need to ask about this area for you to understand the successes scored by this government with the help of G7 including France in terms of training our military personnel, provision of hardware and keep on pushing Boko Haram out of Nigeria.

“Nigeria has been the main battle ground. We were not aware of their international colouration until they claimed that they are loyal to ISIS. So I assure you we are doing our best.

“When we came in they were controlling 14 local governments where they hoisted a flag and declared it a republic or a kind of caliphate of some sort. But now, they are not holding any local government.

“They are exploiting available technology in terms of using improvised explosive device on soft targets – in Mosques, Churches, markets and motor parks. Many of the territories they held captives have been freed and now our main problem is rehabilitation of infrastructure destroyed, educational, health, bridges blown etc. We have made a comprehensive survey and very soon we will start to empower them.”