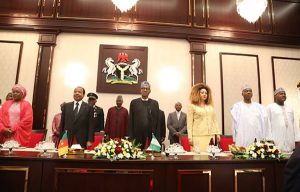 President Muhammadu Buhari on Tuesday evening disclosed that over 56,000 Nigerians are currently taking refuge in neighbouring Cameroon because of the activities of the Boko Haram sect in the North Eastern part of the country.

He said he was saddened by the terror unleashed by the sect on the country which he said led to the killing of 20,000 people.

Buhari spoke at a state banquet he hosted in honour of visiting President of Cameroon, Paul Biya, and his wife, Chantal, at the Presidential Villa, Abuja.

The President said his administration was working day and night to rebuild destroyed facilities in the North Eastern part of the country so that the Nigerian refugees could be brought back home as soon as possible.

“I assure you that as soon as data on IDPs are ready, we will bring you back home safely,” the President said.

While listing some of the achievements of the nation’s security forces against the sect, Buhari said there was no longer a hiding place for terrorists in Nigeria.

Describing Cameroon and Nigeria as two nations that have come a long way, the President said the two countries had always embraced peace and dialogue.

He also commended the crucial role Cameroon is playing in the multinational force established to tackle insurgency.

He described his visit to Cameroon last year as the most memorable of his foreign trips, adding that nobody complained about the trip.

Biya, who spoke through an interpreter, described Buhari’s trip to Cameroon last year as a turning point in the history of the two nations.

He described Boko Haram as a common enemy of the two nations with its goals running contrary to the aspirations of our people.

He expressed his wish to see the over 200 schoolgirls kidnapped in Chibok, Borno State rescued soon.

He promised to continue to take care of the Nigerian refugees residing in Cameroon.

The Cameroonian President expressed delight at the achievements of Nigerian security agencies against the Boko Haram insurgents and expressed the conviction that the sect no longer had destructive power.

He stressed the need for more consultations to improve the economic relations between the two countries.

“We are at the beginning of a new era in the relationship between our countries as evidenced in our discussions today and the agreements we signed today. I am delighted,” Biya said.

The state banquet was attended by wife of the President, Aisha; Vice-President Yemi Osinbajo and his wife, Dolapo; the President of the Senate, Bukola Saraki; the Speaker of the House of Representatives, Yakubu Dogara and his wife; the Chief Justice of Nigeria, Justice Mahmud Muhammed; governors of Taraba, Cross River and Adamawa States, ministers and other top government officials.