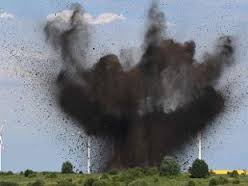 A car driven by a suicide bomber has exploded after ramming the gates of the Chinese embassy in the Kyrgyz capital, Bishkek. Deputy Prime Minister Zhenish Razakov said the suicide bomber died and three embassy employees, all Kyrgyz nationals, were injured.

China’s foreign ministry condemned the bombing as an “extreme and violent attack”.

No-one has yet claimed responsibility for the suicide bombing.

Chinese foreign ministry spokeswoman Hua Chunying said China has demanded that Kyrgyz authorities take all necessary measures to ensure the safety of Chinese institutions and personnel in Kyrgyzstan, launch a thorough investigation to find out the truth of the incident and harshly punish the perpetrators.

The vehicle reportedly smashed through the gates and exploded in the centre of the compound, close to the ambassador’s residence. Social media footage showed smoke billowing above the building.